$ 3 trillion: This is the market capitalization of Chinese companies that smoked following the recent results of Beijing’s economic policy.

As Frederick Lordon says, the stock market is useless anyway.

The Chinese government’s concern is that money – hungry investors are losing feathers.

Is this the main concern of the Chinese people? I don’t have that impression.

Should we complain about it? If you are an investor, otherwise, of course not.

Because the big teams that drank the trophy must respect the rules, reduce their prices, and put an end to monopolistic practices.

They need to revise their relationships with their employees, increase wages, reduce working hours, and control overtime.

By lowering the financial balloon, it shows which way the Chinese government is measuring.

Capitalism was reintroduced to China thirty years ago, and it will attract the capital and technology found elsewhere.

A self-centered socialism would have taken many more decades to achieve the same result.

The choice of transparency and reform was a difficult choice, fraught with contradictions, which destabilized a society as a result of the Maoist era.

Needless to say its social cost was enormous, the Chinese people were put to the test. But what is certain is that the tremendous growth of the economy provides the resources that the majority of Chinese use today.

With the swollen middle class, China has been responsible for reducing inequalities in the world for 20 years. Recently, the goal of eradicating complete poverty in China was achieved.

Of course, this is a phenomenon well known to growth economists, and the tremendous growth of the wealth produced has made the rich even richer.

It is clear that the entropy of this system will cease, and the Chinese government wants to pursue a common redistribution between different strata of the population.

This new policy will only surprise those who adhere to the ideas received in the West, and will only see the bad capitalism associated with the worst of socialism in China.

In fact, this policy reflects the evolution of the balance of power within the Chinese state. Like all states in the world, it is a strategic field where enemy forces collide. They do not have the same vision for the development of the country as they do not have the same interests. As everywhere, the forces that make up the dominant group in power determine its policy.

However, what recent events show, and more importantly than you might think, is that the Xi Jinping line has clearly taken the lead and its implementation is increasing a gear.

What does this political line have today?

Regulating the stock market operations of large Chinese groups abroad, imposing regulatory standards on the collection of personal data of Internet companies, transforming the vast private sector into a non-profit sector, calling for large groups to impose fines for non-compliance with start-up competition rules and video game standards And the severe limitation of the use of minors, the generous contribution to the enactment of new rules, the greater security, the call for an increase in wages in terms of working hours, are already very important in recent years: all these measures go in the same direction.

READ  In West Africa, the first patient to be infected with the dangerous Marburg virus

Even the turbulent minds of the Western left will be forced to see the Chinese government deepen its socialist orientation.

It is true that in a country where the banking sector is controlled by the state and holds 30% of the national wealth, economic and social policy conduct has never been left in the hands of the private owners of capital benefiting from the reforms.

But the new measures show that the hegemonic group that wields power in China is, less than ever, not dependent on or subject to this social group.

If so, he would be horrified by the $ 3 trillion in stock market losses incurred by private sector executives.

However, apparently, he did not care.

So the question is: if Chinese power is in the hands of a businessman named Communists, how can this government, as the right-wing and left-wing Toxa say, pay more attention to the pay rise and working conditions? , Not to mention the amount of prices charged by private groups, the health and education of children? Under conditions that astonish most Western commentators, we will remember a state that liberated the country from the threat of the corona virus.

How can the further construction of socialism with Chinese characteristics, in short, be less than a few trillions? 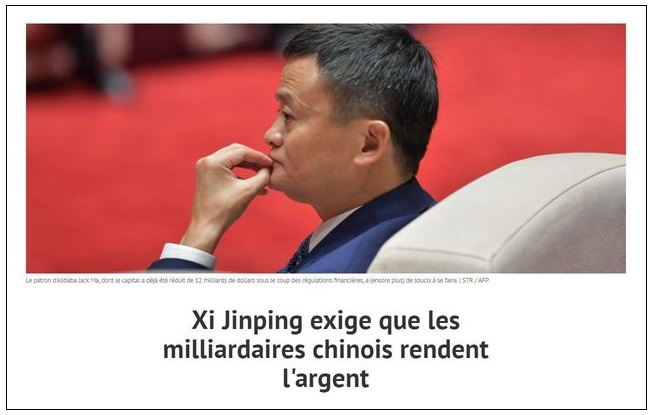